I found an obscure Easter egg in Toy Story 3!  Disney/Pixar is known for planting hints about things that are upcoming.  In Up, Lotso (the purple evil bear from TS3) is a toy in the little girl’s bedroom as she watches the balloons rise outside her window.  TS3 was the next movie.  They always do this.

I’m kind of a big, diehard Disney and Pixar fan.  If they animated it, separate or together, chances are I love it.  Right now I’m watching Phineas & Ferb.

I am also a Mac fangirl right on down to going to MacWorld in San Francisco and getting to see the first gen iPhone the very day Steve Jobs announced it.

So it’s no surprise that I would love Toy Story 3, and that I know dates of the movies and approximate dates of when Apple announces products and releases them, such as Apple acquiring Siri in April 2010 and announcing it in October 2011 just a couple weeks before release.

A couple days ago I was watching TS3 for the third time that day.  It’s what I had access to at the time, and as usual for me, I read a lot of the credits.  If I worked on one of those movies, I like to think that those who appreciate the movie might see my name and be a little impressed.  So I read them to be impressed for those who worked on them.  Twenty-two people listed in HR.  Criminy.  But I usually pay only slight attention to the production babies.  That’s a list toward the very end with the names of all the babies the cast and crew had (birth or adoption) while working on the film. 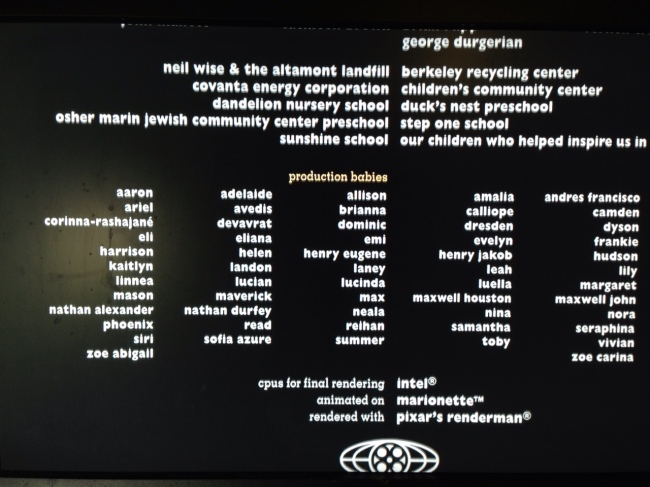 Do you see what I see?  In this movie from 2010, Siri is listed as a production baby!  Disney got Siri in 2010, and stuck it in there the year before revealing it to the world!

I also haven’t seen anyone mention anywhere that Andy’s mom is Emily. Jessie’s former owner.  They look the exact same, and Andy even has the hat Emily had as a child, which matches Jessie’s.  But that’s not quite as obscure as Siri.

I deserve a prize. 🙂

1 thought on “Off the topic of writing for a moment”