All bold text is from quoted directly from the book.

I guess I shouldn’t be too made at Kate.  It’s not her fault that she went off and got sick after working for nine months to get an interview with Christian Grey, but couldn’t she had at least tried to go?  She told me that, as the school paper editor, she couldn’t blow it off, but didn’t she do that by making me go?  Whatever.  I went.  I saw.  I make a fool out of myself.

I was nervous enough that “I set off from Vancouver, WA toward Portland and the I-5,” without paying any attention to going the wrong way.  Portland is in the opposite direction from Seattle!  At least the Interstate Bridge wasn’t up, so I wasn’t too badly delayed, and I got there in time.

The office was really unsettling, so sterile, and what was up with all the women being bleach blondes, like accessories to someone’s fetish instead of human beings doing their jobs?  Can a boss even hire based on hair color, or require you to change your hair color?  I don’t know.  Maybe?  One of his assistants was a girl named Olivia, and her fear was weird, and I think makes sense after something that happened in the interview.

Oh my god, I was so nervous meeting the guy.  I thought I would meet some old guy, so shouldn’t have been nervous, especially nervous enough to trip over my own feet and face-plant on the carpet.  I couldn’t even have fallen in a cute way.  That would have been lucky.  So I broke physics and went heels over head, I think.  When I looked up and saw him, oh my god.  He was hot!!  When we shook hands, I felt tingles in weird places!  He he was young too, like maybe young enough for me to date, if someone as hot as him would go for someone as modest as I pretend to be.  Well, it’s one interview, so it’s not like I’ll see him again.

His office was big, really big, like he’s-compensating-for-something big.  He had these stupid paintings and I made an idiot out of myself again.  “They raise the ordinary to extraordinary.”  Oh god, why did I say that?  I guess that was better than how I dropped the tape recorder a couple times.  Why did Kate give me a tape recorder instead of a digital recorder?  That girl’s rich enough that she doesn’t need to use tapes.  And why am I allowed outside the house without a padded helmet?  That face-plant, the recorder, and the worst hasn’t happened yet.

The interview with such a control freak was boring.  If he wasn’t so hot I was gushing, I would have been more eager to leave.  I don’t want someone controlling my life the way he controls his companies.  He said to me, “If I were to decide I was no longer interested in the telecommunications business and sell up, twenty thousand people would struggle to make their mortgage payments after a month or so.”  He was almost gleeful how he told me.  A company like this should be paying its employees enough to be more than paycheck to paycheck, but it sounds like half are just getting by, and he was getting off on that.  What an asshole.

I asked questions about something else, and he made inappropriate sexual innuendo.  If I was an employee, I’d have grounds to go to HR and maybe file a lawsuit for how overtly sexual he was being.  Maybe this is why Olivia was so scared to do something wrong.  She was terrified she’d lose her job, or maybe he was making passes at her.

He told me he’s a benefactor of my school’s farming program, and that he does it because there are people without enough to eat. If he was someone else, this would be nice.  But after his sick thrill at having the ability to toss twenty thousand families into financial turmoil, and how much of a control freak he is, I started thinking maybe he’s only doing it because he likes controlling the lives if people in poverty.

I read through Kate’s questions, and didn’t even think when I asked if he’s gay.  Holy shit.  Why did I do that?  This guy already was freaking me out, and then there was that question?  I hope he won’t retaliate against me for it.  I told him that I was just asking what Kate wrote down, and he wanted to know if the questions weren’t mine.  I told him I’m not Kate, who he had the interview with, so why would they be my questions?  How much of an idiot is he?!

He used my embarrassment to start prying into my own life.  What could I do but answer?  I was scared!  Then he tried getting me to stay with him, and ordered me to drive safe when I said I needed to head home.  What, is he going to have someone trail me and run me off the road?  I couldn’t wait to get the hell away from him.

I managed to not fall hurrying the hell out of that place.  I felt sick.  On one hand, turned on because he’s pretty sexy, but disgusted with myself for feeling that way about someone who obviously doesn’t care about anyone else except for the control over their lives.

Getting home was a relief.  I was hours away from the creep, and I’m glad it’s over, and I don’t have to see him again.

I went to work, dull stuff, and didn’t really want to get home to Kate pestering me about why I didn’t want to spend more time with someone who made me uncomfortable.  She listened to the tape and knew that.  What kind of a bitch is she to say I should have spent more time with him for her stupid article?  I already lost half my day.  It told her he’s interesting, and she had to go off and snark that me being fascinated in a man is a first.  She wanted to know if Christian is gay, and jokes about me?  Maybe she’s hiding something herself.

Going to bed ended up being the best thing that happened all day.  I still can’t get over the feeling of being violated by his sexual overtones.  How inappropriate can he get?

Met # of days ago: today

Recapping Fifty Shades from the point of view of Ana writing, mentally, in a journal.  I did decide to line up days of the week.  The book opens on Monday, May 9th, and since May 9th was a Friday this month, I’m just bumping the date forward a few days so you can feel the time, the Monday blahs, the Friday yays.

Since I actually live in Vancouver, and am in Portland a lot, I’ll add in some pics of some of the places mentioned.

I will also have the following three counts:

Really, it hardly counts to say you’ve known someone for two weeks if you only met them for a few minutes ago a couple weeks ago, and had no contact since then.  So this is why I have that middle count.

The leader of the protesting in Nigeria was arrested.  Authorities say she claimed to be a mother of a kidnapped girl, and fellow protesters say she did not, that “save our daughters” doesn’t mean that the participants must be parents of the specific girls involved.

I am filled with dismay that in this world, in 2014, from Nigeria to even the US, women are having to fight for basic rights.  In Nigeria, it’s the right to an education without being kidnapped and sold into marriage.  In the US, it’s to access medically-needed birth control, equal pay, and to not have our rights to vote revoked.  In 2014, having two X-chromosomes still means we are second-class citizens.

Just $12 to buy a girl.  234 girls.  $2,808.  If that evil group would sell the girls to me, I’d hand over the money to guy those girls so the could go home.  How horrid that the value of a life is so little.  The people who buy these girls as brides are worse than cowards.  They are pathetic, stupid people who no one will ever love.

Edit to add: More girls have been kidnapped.  The US is finally sending negotiators.

And yes, I know this is a blog that is primarily about writing, but as strong women in fiction is my attempt at trying to promote strong women in general, this whole situation is up my alley.

In Nigeria, 234 girls were kidnapped out of school, and reports state they’re to be sold into marriage.  Child brides.  For a whopping $12.  The response by the world has been nothing.  A few news reports here and there don’t count. 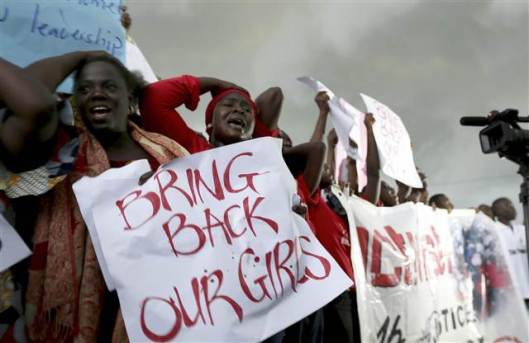 Families in Nigeria have been protesting.  The rest of the world has been silent.  Why?  WHY?!  The US sticks its nose into everything else.  Why are we leaving these girls to be property?  I am unspeakably angry and hurt for those girls and their families.  WHY are we doing NOTHING?!