Today the smoke from the Washington and Oregon wildfires hit us.  It was rather surprising to walk outside and see such haze, and to smell the smoke.  When I stepped into my front porch, this sight greeted me:

I was slightly unsettled to enjoy the smell of the burning wood.  The sweetness reminded me of camping, and big fires over which we roasted marshmallows and popped those things of Jiffy Pop not meant to be used over open fire.

But at the same time, I realized that this fire is burning homes to the ground.  Millions in property damage has happened, and three firefighters’ lives were lost two days ago.  In addition to the National Guard and firefighters from overseas, for the first time in Washington’s state history, civilian volunteers were asked for, especially those who could operate heavy machinery, such as bulldozers and back hoes, to help create a firebreak.  If I remembered how to operate them (I used to play with them at a job I had where driving forklifts was a part of the job, and other machines were used like toys in our downtime), I’d be out there.  The temptation is strong to go anyway. 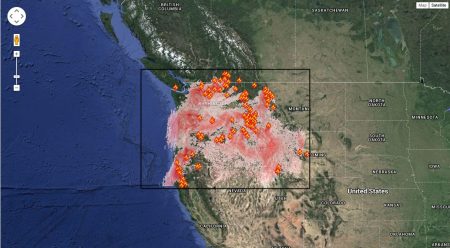 The air quality today reached very unhealthy levels in the region.  My husband had a hard time breathing.  My daughter’s eyes burned.  I was fine, thanks to enough time spent camping that smoke doesn’t affect me.  But many, many people were experiencing ailments from it all.  One of my friends had to leave work early.  Others reported needing inhalers.

Something about today reminded me of another large fire I was fairly close to nearly 25 years ago.  Some of you may remember if, and others will have never heard of it.  In what came to simply be called the Oakland firestorm of 1991, the skies seemed to rain fire.  High winds kicked up flaming debris, and let it down in new places, causing new fires to pick up.  So many things went wrong in fighting the fire, everything from the narrow walkways into the hills making accessing homes difficult, to the hydrants having outlets that were incompatible with the hoses.  Thousands of homes were lost, as well as 25 lives.  Watching all this on TV, hoping it didn’t managed to reach us an hour away, both cemented a fear of fires in me and made me love fire out of respect for what it could do.  I was too young to remember the house fire that nearly killed my dad, leaving that fire as the first large one in my own memory.

I think the difficulty containing the fires in the Pacific Northwest is what’s making me think of Oakland.  In California, wildfires are more or less business as usual and are expected.  So those fires weren’t any major concern to me personally (though I’m sure those with homes affected would want to punch me for saying that).  But these fires, 49 of then between large and smaller, are proving a challenge due to a lack of manpower.

I ran a couple errands later this afternoon.  There was this palpable feeling in the air of avoidance.  Though others and I would glance outside periodically at the first store, no one mentioned the fires.  Speech would halt, as if someone edged too close to the four-lettered f-word that’s replaced “fuck” for the day.  Talking about the fire was like bad luck, perhaps a jinx of the hope of a soon containment.

While driving, I started directly at the fiery red sun, surprised that I could look right at it without going blind.  The smoke was that thick in the air still.

As the evening went on, the sky cleared up enough for me to take a photo of the moon.

Who knows what tomorrow’s going to bring for the fires.  For me?  I’m going to do my best to force it from my mind so I can get work done.  We are definitely in for weeks more of fires, and so much march onward while the fighters do their work.

2 thoughts on “A smoky day both still and breathtaking”