(Interview with an Author index)

Over three and a half years ago, T.J. Loveless kicked off my original series of author interviews.  As one of the earliest author I view in any mentor capacity, I decided to ask her to bestow upon me the honor of an interview again, and I am pleased to give you the answer you already know! 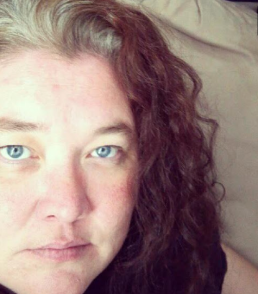 A lot can happen in one year. How do you feel the last year of writing has gone?

2016 can kiss my fat ass lol badly. Oh so very badly. My writing has suffered, and there’s a lot of personal hell, lol

I’ll raise a glass to that! It seems the last twelve months has been a hard one for several writers. I hope things are starting to look up for you.

Many writers, if not all, come up against deadlines, personally or otherwise imposed, and find that they’re behind. How do you handle this without being tempted to walk away, or is there no such thing as too far behind to leave a part of oneself in the dust?

I’m so far behind I’ve come to the realization I just need to start over. I’ve missed six deadlines, and cried every time. But I’ll get back in the saddle soon.

Can you elaborate on what you mean by starting over? Do you intend to abandon the series you’ve started and begin new ones?

Starting over. I’m going to finish all the series I started. By saying starting over, I mean act as if I’m a first time published author. We’re working on branding, logos etc. I’ve put out books, but haven’t marketed in over a year. I’m waiting to finish everything I have open now, prep for publishing and then release all at once, marketing the series itself. Plus readers won’t have to wait. I’m in the process of redoing covers, reformatting, and revising the ones I have out. It’s a complete revamp, and start over. It’ll take until next Spring.

That sounds overwhelming! I can’t wait for the cover and to see how you handle everything treated as new. Will you blog about the process or post to Facebook?

I might. I’ve thought about it. A complete reboot type of post. Although right now I’m barely able to keep up with what I’ve got. lol

Your Fractured Metal series wonderfully captures how tour of duty can affect the actions, thoughts, and choices of soldiers after they’ve returned home. What do you see for the future of this series? Is there an anticipated release date for Shattered Gold?

I want Shattered Gold out before the end of October, but fairly certain I’m going to miss that deadline too. I’m wavering if this series is going to go past book three, so not promising. It’s a wait and see strategy.

I can see how continuing this series would be so difficult, and it’s better to handle these stories appropriately instead of pushing them out when they won’t come. Have they given you any ideas for others?

I’m finishing all the series I have and plotting out three more. I’ve tried different genres, stretched as a writer. I’m going back to Dark UF. I don’t know if the metal series has more so I’m leaving it open just on case.

As a mother myself, Going Thru Hell’s Kylie’s difficult decision is heart-shattering.

Might Reign of the Braiders (Going Thru Hell, Dark Storms) expand into a larger universe, perhaps children of other Braiders?

For the longest time I didn’t think it was going past book one, but some stories are starting to whisper …
Oh, an intrigue! How many wild horses will it take to get you to whisper what some of those whispers are saying to you?

For the whisperings, I have one series I’m plotting that is a little different, and even prebought most of the covers, etc. It’s Dark UF, playing with humans. Plus I have another series I turned into a serial, the first four covers done, the first novella done, that deals with women as heroes. Because it isn’t just men who can save the world.

“It isn’t just men who can save the world.” That is such an important lesson, and it’s growing more important by the day, despite this being 2016….

As time goes by do you find your thoughts or feelings about your characters changing?

That is part of the revamp. Both of the twins have a story. One redeeming and one…well… Life is never predictable no matter what the gods want.

What goes through your mind when you re-read your earliest work?

Since I’m revamping all of them, I can see a lot of improvement over 3 years. Fell in love a with a few characters all over again.

If you could ask a completely random author any question about writing or their own books, what would that question be?

Of all the characters you’ve written, which is your favorite and why?

And there you have your next question! Of all the characters you’ve written, which is your favorite and why?

I have a love for all of my characters, but two characters still tug my heart strings, and I still think of them. Karen and Kylie. Both women I put through hell, made them decide which evil would win, in order to beat the worse evil they were facing. Both with trauma issues, both trying to find the strength to live at least one more day. In the case of Kylie, she made the ultimate sacrifice for her children. She faced it, she accepted it, she understood the consequences of her actions, and did what she had to do. I love her for that. I’m not sure I could. Karen, who lived, but who fell apart and had to put herself back together, in horrifying circumstances. Who had to learn to live with her decisions, good and bad. And decided every day to stand up, and take another beating if necessary. These two are the women I aspire to be, and often fail. But one day, I hope to be like them.

Thank you very much, T.J.!  I hope you’ll share with is your process of that fresh start as it happens, which very well may help inspire some who’ve fallen behind and are unsure if they should give up or push on (push on!)  Without any doubt, the future will bring some wonderful work from you.