Over the last couple days, I’ve seen people comparing these two, and saying that they’re not the same, and because Donald Trump is worse, that makes Christian Grey okay.  Even people I know who’ve been against Grey are defending him now.  Let’s toss in people now defending Bill Clinton by saying his assaults are in the part.

That needs to stop.  That’s making everything so much worse.

First off, the easier issue to tackle here is the claim that Bill Clinton’s assaults being in the past.  While the actions are indeed in the past, the repercussions for victims doesn’t end once an assault is over.  How do you think it affects those women to see their assaulter spend eight years in the White House, and now his wife, who threw them under the bus in his defense, trying to get them back in? Abuse in the past doesn’t mean that victims’ traumas are in the past.

Guess what.  Trump’s assaults are in the past too.  You can’t say Bill’s are in the past to dismiss them while treating Trump’s assaults as current.  They’re all current.  They’re current as long as the victims have to deal with what happened, and they’re current as long as the perps haven’t had to face criminal action to answer for what they chose to do wrong.  Dismissing one group of victims to stand by their attacker and his spouse is cruel and wrong, and it’s doubly cruel and wrong when they’re being hand-waved aside to try to make another perp look worse.  What they’ve both done is wrong, Hillary throwing them under the bus is wrong, and all three need to be treated like the assaulters/assault-defenders they are.  There shouldn’t be a hierarchy here.  One person being raped shouldn’t mean that another woman who was “pussy-grabbed” should be told that her experience doesn’t matter because a penis wasn’t shoved into her vagina.  Yet that’s the message sent here by this growing willingness to overlook the women victimized by a man marginally more likable because the other man is currently less-likable.

Second off, the only reason being given for why Grey isn’t “as bad” as Grey is because Grey is fiction.  But is he really?  Almost overnight a new trend has popped up even among anti-abuse authors defending Grey and claiming that no one should have a problem with these books because “[y]ou know the difference between a fictional and real life,” and saying things like being a fan of Game of Thrones doesn’t mean wanting to be beheaded in real life, or being a fan of Slytherin doesn’t mean wanting to participate in Death Eater activities in real life. 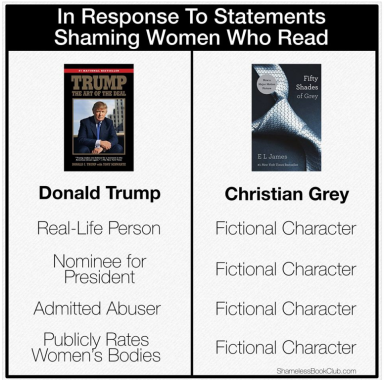 Second off, fandoms such as Game of Thrones and Harry Potter depict things that can’t happen in real life.  Third off, no one happily fantasizes about being in the position of people who are three seconds from being beheaded and then as the guillotine falls and wishes it to happen to them, or of being on the receiving end of the excruciatus curse.  No one advocates those actions to be good actions.

Every day, in real life, women do end up with people like Christian Grey, and every day, men act like like him.  No matter how much you may love Voldemort, you can’t be with someone like him, and people can’t be like him, because that kind of magic that can make him alluring doesn’t exist.

Coast to coast and around the world, women talk about how much they want Christian Grey and how wonderful he is, and our younger women and teens hear this and believe that men like him, men who commit his actions, are acceptable.  For all the talk about how all you have to do is talk to your kids, no one has found a way to make that a silver bullet against abuse.  Most of today’s women in first-world nations have grown up hearing that abuse is bad, and yet how many of us ended up in abusive relationships anyway?  At least a third of us woman (and a quarter of men).  How can anyone stand by and support supportive talk about an abuser who is realistic enough that he exists in real life?

Just a handful of years ago, we were calling out Edward Cullen for being controlling and abusive.  Rules were placed on Bella that she didn’t want.  When she tried living her own life and seeing a friend, Edward disabled her truck.  He broke into her house repeatedly to watch her sleep.  He stalked her before abusing her.  Fan defended his behavior as he just loved her so much that he couldn’t control himself, while many others expressed deep concern about teenagers pining for a buy just like him, and looking for human boyfriends who’d act like him.  But when Christian came along, Edward seemed mild in comparison, and between the two, Edward became desirable.

The result?  Desensitization.  Landing someone who acts like Edward is now no big deal, and when men start to get controlling, they’re excused because they just “love” their victims too much.  The excuses made have become validation when that character ceases to be seen as someone to rally against.

One of the worst things for today’s women and girls is to stop rallying against Christian Grey’s behavior just because he’s in a book while Trump is on a debate stage.  By no means should we abandon speaking against Christian.  Do we really want to normalize his behavior and make it seem acceptable on account of how he can’t reach through the pages and literally “pussy-grab” a random woman?  No one besides perhaps Trump’s wife, Melania, defends him as a good man to have, yet countless defend Grey, and in doing that, are teaching our children and teens that Grey is someone to strive for.   When we’re already in a free-fall where assault is being seen as no big deal…well, as long as it happens to someone else because we all see it as wrong when it happens against our own bodies and our on children…why should we keel over and do nothing to stop it?

Stop making abuse a hierarchy and taking the mindset that you only need to be against what you think is worse.  Give up the mindset that being against one series means shaming a entire genre.  Start looking at how fiction affects what is seen as normal and acceptable in society.  You can be against Christian Grey while enjoying erotica, and you can be against Christian Grey AND Donald Trump AND the Clintons.  It’s not zero-sum where you have to pick one. 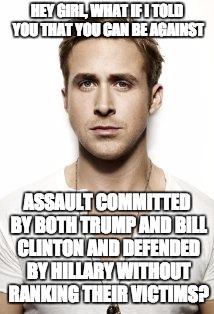